According to Mirror.co.uk, pop superstar Lady Gaga is such a huge fan of British heavy metal legends IRON MAIDEN that she helped the band backstage during their Florida tour stop.

The singer appointed herself an unofficial roadie for a couple of dates of IRON MAIDEN's "The Final Frontier" world tour, helping out on the tour bus with chores such as ironing and serving drinks.

"It's a side to Gaga we've never seen. She is a massive IRON MAIDEN fan and was willing to be at their beck and call, just to hang out with her idols," a source told Mirror.co.uk.

"She was humming along to their hit 'The Number Of The Beast' while carrying out her chores. And after all her hard work backstage she was rewarded with some drinking games."

A photo of Lady Gaga hanging out with IRON MAIDEN drummer Nicko McBrain backstage at the MAIDEN concert in Tampa, Florida on Sunday, April 17 can be seen below. She posted the picture on her Twitter profile with a caption that simply said "Sexy Beast. 666." 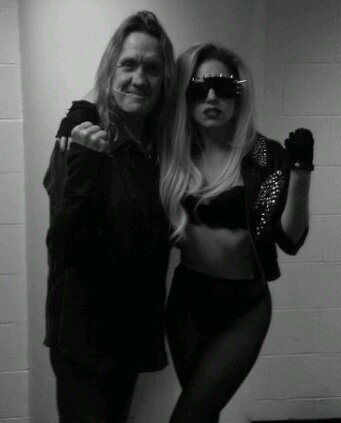